I was born and raised in Rhinelander, Wisconsin. Following my graduation from Rhinelander High School in 1943, I entered the Armed Forces at age 18. I was shipped to England, and on June 8th, I crossed over the channel and landed on the beach in Normandy as a replacement unit. I joined the 9th Infantry Division. I was wounded twice as the army pushed through France and again as we crossed the river into Germany.

While attending the University of Wisconsin after the war, I was touched by God’s grace and began to discern what God might be asking of me. After visiting the Benedictine Abbey at Benet Lake, Wisconsin, I decided that was where God wanted me to be. I entered in 1948 and made first vows in January, 1950. As a Brother, I was in charge of the dairy cattle, raising chickens, and other roles in the monastery. I was sent to El Salvador and then to Costa Rica as a missionary where I built a vocational agriculture school. After five years, I returned to Benet Lake and served in administrative and maintenance roles. In 1969, I was sent with three other monks from Benet Lake to the monastery in Pecos, New Mexico to share the charismatic renewal with the community. In 1974, I was ordained a priest by the Archbishop of Santa Fe. In addition to serving in administrative roles, I offered retreats, parish missions, spiritual direction retreats, counseling, and teaching. I also served as the Archdiocesan liaison to the Archbishop for the charismatic renewal. In September 1983, I came to Hawaii to found the Benedictine Monastery, later named Mary Spouse of the Holy Spirit. In 1985, I was asked to be the spiritual director of the newly formed Basic Christian Community of Hawaii where I served until my retirement.

At the age of 7, I received the Sacrament of Confirmation. From that time on I gradually became aware of a love for Jesus in the Blessed Sacrament and the Mass became a life-giving participation in the Church and in the Catholic faith through grade school and high school. With encouragement from teachers to attend daily Mass, I was able to grow in love of Jesus present through the liturgy and the scriptures. This allowed the Lord’s call to become more dominant in my life. At the age of 17, one year after high school, my parents gave their permission to enter religious life. I have loved ministering in the Church through teaching, counseling, and praying for people wounded in their early years and throughout their lives. Not being worthy of such a vocation in the Church, I am ever grateful for the gift of being called each day to pray for the world and its peoples. 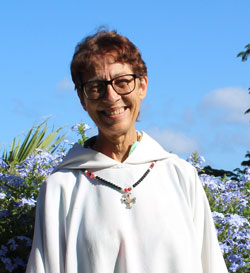 The first idea of a vocation to religious life occurred in college. I was attending daily Mass and meeting with a small group of friends (both men and women) afterwards. We had such a dynamic sharing of our experience of God, I thought maybe the Lord wasn’t calling me to marriage, but to community life. My vocation came from many seeds of faith. I was blessed to grow up in a Catholic family. I also received 12 years of Catholic education, and I had a sister in the convent and a brother in the seminary. The Catholic charismatic renewal was generating prayer groups which I was a part of in college and afterward. The Abbot from the monastery I later joined had been a keynote speaker for our Catholic Charismatic Conference. The parish I was attending in Texas had links to the Pecos Benedictine Monastery. Our pastor had attended their School for Charismatic Spiritual Directors and many parishioners had been on retreat there. When I asked, while fasting and praying for God‘s guidance, whether I should join or not, he said that it was both “important“ and “necessary” to do so. That personal experience of God in a community of men and women animated by the Holy Spirit in healing love is still a dynamic reality, even 38 years later.

I am one of the few ‘local girls’ who has dedicated her life to Christ as a religious sister. I entered religious life in the year 2000 and took final vows in 2007. I grew up in Kailua, Oahu and am a 1979 graduate of Kalaheo High School.  I attended the University of Hawaii at Manoa where I played on the Rainbow Wahine basketball team and volleyball team.  I am also a former Continental Airlines flight attendant.

I serve as a certified Spiritual Director and a member of the Leadership Association of Religious Congregations Vocations Committee.  I also serve as the Spiritual Advisor to the Catholic Homeschool Ministry and Unbound ministry.  In addition, I regularly lead small groups on retreat to Kalaupapa, Molokai. In Kalaupapa we have the privilege of visiting the sacred and loving community of men and women who were once served by St. Damien and St. Marianne.  I also do prison ministry.  I have been the keynote speaker at many diocesan-sponsored youth, young adult, and family events and have led parish missions. I am blessed to have led youth and young adults to World Youth Days in Sydney, Madrid, and Rio de Janeiro. I have also attended two canonizations in Rome – St. Bernard Tolomei (founder of the Congregation of the Blessed Virgin of Monte Oliveto, under the Rule of St. Benedict) and St. Damien of Molokai.

I remain very active in ministry throughout the Hawaiian islands and the mainland. I enjoy ministering to youth and young adults bringing joy, faith, hope, love and prayers to each and every person I meet. 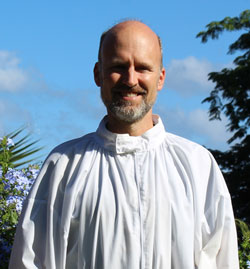 Back in my 20s when I first started responding to a call to religious life, I quickly discerned that the one thing I would never be was a Benedictine. I have an aversion to schedules. St. Benedict’s life prior to joining a community seemed much more appealing to me. I like the idea of living in a cave—except for the part about actually living in a cave. I am a convert to the Catholic Church, having been raised Lutheran. During my senior year in college I was blindsided by The Dark Night by St. John of the Cross; a single poem changed the course of my life. St. John’s cry of love filled me with longing for God. All I wanted to do was pray. I began to feel the pull toward religious life (even though I wasn’t Catholic). After graduating, I spent six months volunteering at the ecumenical community of Taizé in France. While there, I fell in love with Jesus in the Eucharist and realized that I was Catholic. Since St. John of the Cross had first first lured me, I decided to join the Carmelites. Over a period of several years I lived in three different Carmels. They were all nourishing communities, but I never felt truly at home. When I left Carmel for the third time, I decided that I was not called to religious life.

I returned home to Washington State and opened a massage therapy and spiritual direction practice. I loved my life. I had more time to pray and meditate than ever before; I enjoyed assisting people in their physical healing; I was passionate about accompanying them in their spiritual journeys; I relished being with my family and friends; and I spent as much time in the mountains as possible, skiing and hiking. I couldn’t imagine being happier.

Suddenly in the fall of 2012, I woke up one morning with my heart racing; God let me know that my current life was over and that I needed to get ready for a change. I reluctantly contemplated returning to religious life. After a few visits with the Jesuits and the Benedictines however, I decided to attend graduate school instead. I enjoyed studying Counseling Psychology, but after three years of study I realized that I would never be satisfied doing secular counseling. My entire life-journey up to that point had shown me that only God can heal, and only God can fill the heart-breaking void within us. Simultaneously I knew that I would never know the full joy of life in communion with God unless I responded unreservedly to His call to religious life.

In researching monastic communities, I found the Benedictines in Hawaii. I was thrilled to find a mixed community that was open to the charismatic gifts and that engaged in healing ministry. With anticipation and hope, I came for a visit in 2017. Within a week I knew that I had found the monastic home I had been looking for. I am thankful to be part of this Benedictine family as we strive toward union with God, sharing Christ’s love with one another and with the amazing friends who share life with us on this beautiful mountainside. I am currently serving as Subprior of the community. 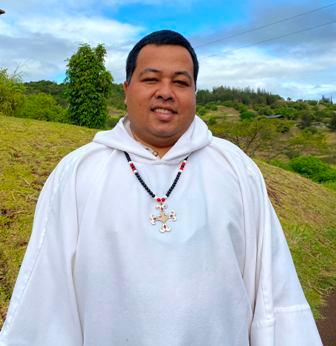 My name is Anthony Jacob Akau; now it's Br. Anthony.  I am originally from the Big Island of Hawaii, but I went to boarding High School-Kamehameha, on the hills of Kapalama on O'ahu.  I come from a family of seven and I'm the second oldest, so it was hard to leave home.  But, I know it was the best way to set an example for my younger siblings.  While at Kamehameha, I attended an exchange program in New Zealand and delved into the understanding of Sovereignty from the "powers that be."  But, while in college at the University of Redlands, I joined the Officer Candidate School with the Marine Corps and was sent to Quantico, VA.  There, I felt split between the "powers that be" and the Sovereignty movement.
Shortly after my time at O.C.S. (Officer Candidate School), September 11th happened, and I couldn't see myself going to war.  I felt compelled to join a religious order in order to "sign" my life away to God.  After some struggles with Mental Illness, Homelessness, and Jail time; I found the Benedictine Monastery.  Which, is where I now reside.
Interview with Br. Anthony